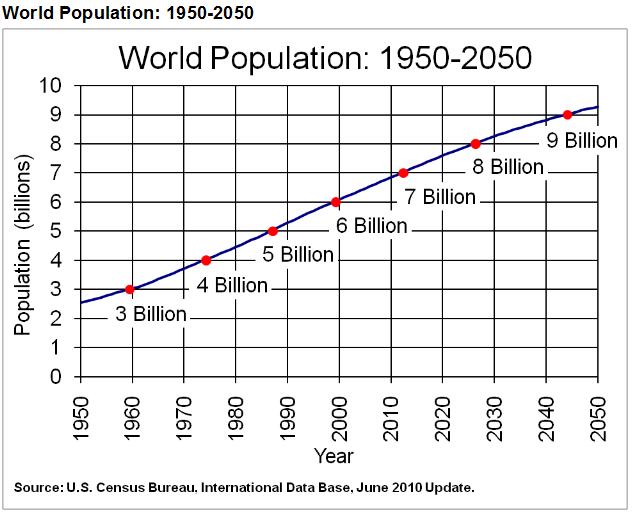 The world population growth rate rose from about 1.5 percent per year from 1950-51 to a peak of over 2 percent in the early 1960s due to reductions in mortality. Growth rates thereafter started to decline due to rising age at marriage as well as increasing availability and use of effective contraceptive methods. Note that changes in population growth have not always been steady. A dip in the growth rate from1959-1960, for instance, was due to the Great Leap Forward in China. During that time, both natural disasters and decreased agricultural output in the wake of massive social reorganization caused China's death rate to rise sharply and its fertility rate to fall by almost half.

Fertility in the less developed countries as a whole is projected to decline from 2.75 children per woman in 2005-2010 to 2.05 in 2045-2050. The decline in the group of the 50 least developed countries is expected to be even sharper: from 4.63 children to 2.50 children per woman. However, realization of these projections is contingent on continued declines in fertility, even as funding for family planning has been declining.

Clearly, most people want and are having smaller families than in the past. This trend has been greatly helped by the wider availability of high quality, safe and affordable family planning services. Still, many people are having more children than they want to. Some 200 million women who would like to use contraceptives lack access to them.

Achieving the predicted projections will require expanded access to family planning, especially in the poorest countries. The urgency of this is clear: If fertility were to remain at current levels, the population would increase to 11 billion, with less developed nations' populations rising to 9.8 billion instead of the 7.9 billion that is projected. Even if fertility rates are lower than projected, the large proportion of young people still makes population growth until 2050 virtually inevitable.

international migration will develop and without an important inflow of immigrants, EU population will start to decrease as from 2012. If the current trends continue, there will be almost 250 million migrants in the world in 2025 of which 65% will be established in the developed countries.

In 2008, 49.9% of the worldwide population live in cities. Urbanization will define this century. For the first time in history, more than half the world’s population lives in urban areas. Over 90 percent of urbanization is taking place in the developing world.

The cities in developing countries will account for 95% of urban growth in the next 20 years and will shelter almost 4 billion inhabitants in 2025.The number of the inhabitants of slums at world level will double between now and 2025, reaching more than 1.5 billion. Cities in the North grew by only 30% in the last three decades compared to 400% for those in the south. In 2050, 80% of the world urban population will be in the countries of the South. 11 out of the 20 first megacities (> 10 million inhabitants) in the world will be in Asia.