After the asset price collapse of 2007, the global economic outlook was bleak. The start of a new decade is usually a time for excitement and hope. Yet, in 2010 the aroma in the air was one of fear and uncertainty. People were questioning the effectiveness of government stimulus packages; “would they really work?” was the question of the day. Should the stimulus package not provide the promised result, citizens around the globe were fearing an economic meltdown of catastrophic proportions. The great depression of the twentieth century would be renamed the other depression.

Governments acted quickly and decisively to counteract the economic downturn, but they never imaged, like a Shakespearean play, the fiscal stimulus would end as a tragedy. 2010 was the beginning of truly turbulent times, the economy was in shambles and the planet began to fight back at its unwise caretakers. Humankind had been misusing resources for too long, some saw incremental and rapid ecological change, but the masses were not focused on reducing carbon emissions. People were unemployed and needed to first fix the economy.

2012 started with a bang. An earthquake in China, flooding in India, and drought in Brazil and Australia put added stress on world markets to assist with disaster relief. Yet, little aid was provided because the once rich economies of the EU and US had struggled since 2008 to regain stable economic growth. Hugh debt burdens strictly didn’t allow for disbursement of aid.

In 2010 the number of climate refugees was at 20 million. The displaced were mostly victims of the earthquake in Haiti, flooding in Pakistan, and droughts in Africa. The newest round of disasters increased the total to 23 million by the end of 2012, but little did the world know that the worst was yet to come. Continued deforestation, rising sea levels, increased number of wildfires, and more frequent occurrences of extreme weather events increased the number of refugees to 50 million by the end of 2015. Refugees seeking shelter from the storm migrated to cities around the world. This mass migration further strained the global economy, as funds to care for the displaced citizens were not available. Yet, governments acted as best they could the total spending on humanitarian aid increased significantly, law enforcement agencies were supported to keep the peace, and military spending was enhanced to quell border conflicts resulting from migrants moving across country borders.

The increased spending did little to stimulate economic activity because spending was not used to create jobs, but to sustain a starving mass of people.

The economic crisis bankrupted many companies. The poster child for the great recession Lehman Brothers became the catch phrase for each failed company. By 2015 global unemployment had reached 15%. Companies couldn’t hire because though many were cash flow positive balance sheets remained underwater and cost cutting was required to put firm back on a path of steady growth. However, the promise of future growth once balance sheets were fixed was never realized. The company of the future was begin to appear in 2015 as more and more companies were hiring workers on a contract basis and allowing them to work from home. Office buildings were slowly transitioning to vacant steel structures with logos offering a glimpse of better days. Vacated building we being transformed into social hubs; bars, cafes, nightclubs, and residential living became the norm. The city center looked vibrant and lively, but underneath the lights and sounds was an economy struggling to survive. Listening to patrons of city establishments discuss the daily grind, one could put their finger on the economic pulse of the city. The talk of the day was of unemployment, economic woes, and fear of being laid-off. 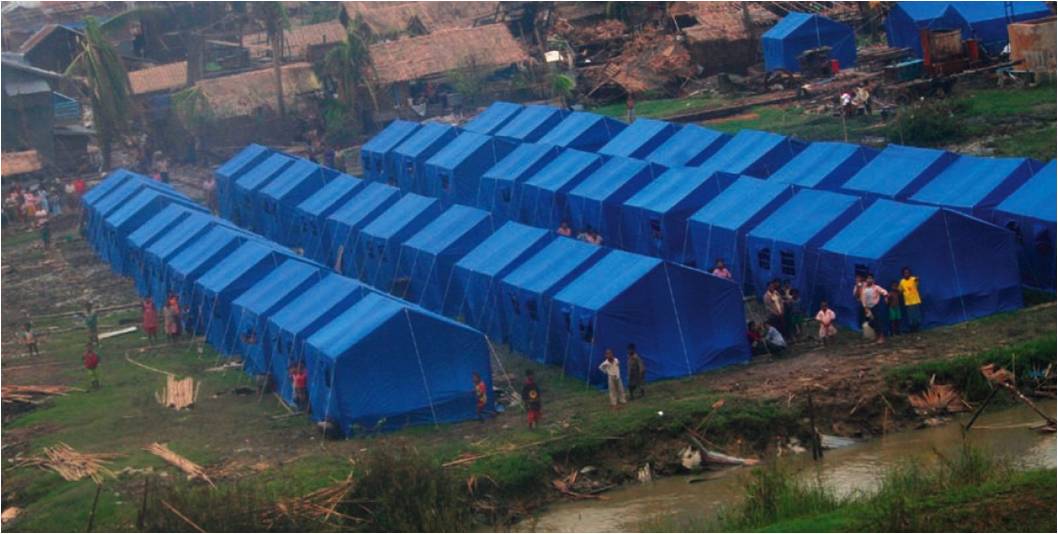 The largest economy in the world, the United States of America, continued its struggles in 2016. The fed still maintained 0% interest rates, but the economy didn’t respond. Large budget deficits due to rising health care costs and social security spending meant the US continued to borrow large sums of money from China and India to balance its budget. The East to West movement of capital that began early in the century maintained its course. The Chinese tried to put pressure on the US government to balance its budget by refusing to buy t-bills, but fear of US government default forced the Chinese to continued purchasing government debt.

Consumer confidence reached an all-time low. The lifeless economy created fear and despair in consumers and they were scared to once again purchase consumer goods.

Meanwhile, Mother Nature continued her assault on humanity. Violent storms, earthquakes, and other natural disasters continued and the number for refugees increased to 80 million by 2020. Poor planning and lack of financial reserves meant spending on infrastructure diminished and cities slowly morphed into slums. The slums were filled with refugees seeking refuge from Mother Nature. Refugee camps encircled cities and created a nightmare for local governments and residents. Displaced immigrants had needs and they had a voice. Hungry mobs demanded assistance from “rich” city dwellers. Little did they know that the high rise buildings were built during better times and in no way represented the current situation of those who worked inside. In fact, most on the inside were struggling to survive themselves. Each lived day to day in fear of being laid off. The chaos caused by climate refugees was noticed by cities around the globe. Those not yet affect by migrants decided to invest in measure to secure their borders before the storm hit. Students, fresh out of universities were on the streets, unemployed, waiting for the government to help. They invested heavily in education because they were given a promise of a better life, however, life instead became bitter! The government loans became due and with no means to repay them loan defaults became the rule of the day not the exception. Unemployment reach 22% by 2020 and the number was expected to rise.

2019 did not have an auspicious start. Anti-government protests and riots among refugees and inhabitants of the cities became as common as wind in Rotterdam. Governments were beginning to fail as angry mobs demanded change. Coups were instigated in less developed nations and new political parties formed in developed nations. This new wave of political fury hit the world at a bad time. Mother Nature was already sending a warning the world, but without cooperation the change would not occur and chaos would become the new norm. Around the globe tremendous pressure was placed on new political parties to bring the economy back on track and to provide humanitarian relief to its affected citizens. Yet, a plan to achieve this goal was nowhere to be found. Shortages of food and fresh water became reality thanks to scorching heat waves, droughts and floods. Agriculture as an industry was in ruins and commodity trading had come to a halt. Deep down, everyone was wondering, what will be the straw that breaks the camel’s back? 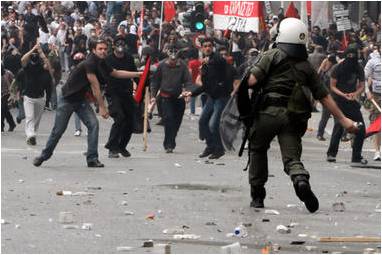 2020 became the year the tipping point was reached. Students defaulting on student loans, falling home values, high unemployment, and an ever-widening budget deficit cause the United States to default on its loans. World stock markets crashed the following day and March 12, 2020 became a day of infamy around the world.

The depression caused by the crashed created a race to arms. Dollars no longer were seen a storer of value, only resources had value. Major global players around the world began securing their borders and engaged in arm conflict to secure oil, food, fresh water, and other resources. Climate change no longer was discussed globally as the climate summit was scraped.

Mother Nature’s call to change fell on deaf ears and she didn’t stop unleashing her fury. The ice caps continued to melt, earthquakes occurred more frequently, and violent storms increased. The number of climate refugees increased from 50 million to 130 million by 2025. With the closing of borders and increased security measure those affected by disaster were left without help and suffered unspeakable pain. Migration of displaced citizen occurred within country not across borders. Refugees moved to city centers and joined the refugee camps. Soup kitchens were strained for resources and food and water rationing was instigated. This meant many went to bed hungry. This hunger quickly turned to hunger as children went to bed hungry. Yet, little could be done to help. Unemployment reached 35% globally and everyone was looking for a handout.

Life in most cities got worse. Slums over ran what once used to be a vibrant city filled with life, laughter and joy. Now it reeked of pain and suffering. Cities that were not affected or destroyed by war or packed with climate refugees tried to return local economies to agriculture. Suburban open spaces were converted to farmland. Yet, yields were low as fertilizer and other resources were not available. City centers that once housed shopping malls, corporate offices, upscale apartments, restaurants and cafes now housed run-down apartment buildings, and a thriving alcohol and an adult entertainment industry. People were looking for artificial ways to escape the thorns of reality.

A few cities were able to protect themselves from this spiral of destruction, as a minority of still wealthy people paid (and fed) guards to secure the citadel they had built to stay away from the view of misery. Few privileged could therefore enjoy "peace" and high living standards in this secured artificial environment.

An overburdened, barely functional legal system did little to maintain the peace. Mankind returned to his natural state, selfish. In wise words of Thomas Hobbes, without a proper functioning government, life is "solitary, poor, nasty, brutish, and short." 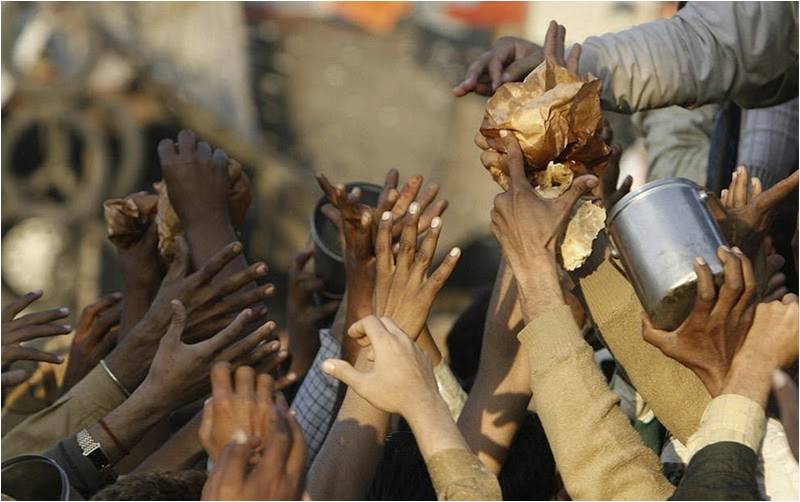 Environmental Justice Foundation (2008). No place like home: Where next for climate refugees. Refugee Camp Picture. Retrieved on August 20, 2010 from http://www.ejfoundation.org/pdf/climate_refugees_final.pdf