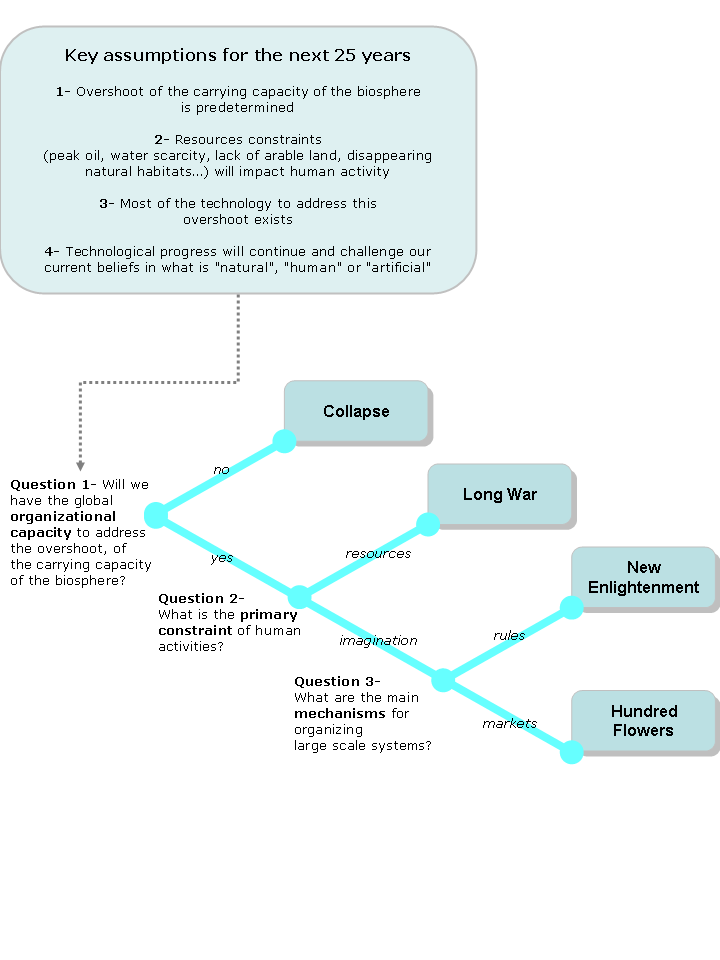 Despite having the necessary technologies at hand, we have collectively done nothing to reduce global warming and to plan for shortages in fossil energies, sweet water, arable land, etc. Crises of growing frequency and seriousness occur, seriously damaging the world economy and producing severe human damages, both nature- and man-made, especially in developing countries. Hundreds of millions of refugees roam Asia and Africa and the migratory pressure on the North becomes unbearable. Borders close, local conflicts multiply and threaten to extend, mobility decreases, economies and societies tend to relocalize. Public spirit is low; it spontaneously produces both local conflicts and solidarities, but this solidarity can no longer extend globally, since each group fights for its own survival. Technology is mostly used to plan for and cope with coming or present difficulties, as well as to provide alternatives or escapes from an uninspiring daily life. Alternatives are found in frugal, hyperlocal community-building.

The way around global warming and resource shortages is found through the simultaneous modernization of rich countries and slowing down of growth in rising countries, especially in Asia, while the path to industrial growth remains essentially closed to least developed nations. This is achieved by a de facto alliance of governments and large firms in the North, to hoard global natural resources and distribute them in an "ordered" way, giving priority to their home countries and their spheres of influence. This produces a permanent state of low-intensity, mostly economic, sometimes military conflict, mostly involving minor countries, but also using terrorism as a constant threat. Nation-states regain strength as the need for security grows, both internally and externally. International trade is slightly reduced and becomes a political weapon, as does the economy in general, producing erratic movements, inflation and high savings. Technological developments are fast but mostly targeted towards security and sustainability, and unequally shared. Public spirit is incensed, both against exterior enemies, as within countries, with strong opposition movements. Technology also becomes the tool of choice for the emergence of counter-cultures, hoping to bring about major changes in the state of the world and, meanwhile, trying to implement them at local, community- or project-based levels.

Citizens and governments achieve a level of global consciousness that allows them to make a deliberate, common effort to prepare for a better future. Rules and regulations are enforced at local and global scales to reduce emissions and energy consumption. Taxes and other incentives try to orient corporate and consumer behaviours towards sustainability. Major projects with global or continental funding produce huge windfarms or solar plants, and test new technologies at a grand scale. Development becomes a priority, with the aim of helping fast development beyond the resource-intensive, heavy-industry phases. "Guilds" emerge as ways of organizing people at a less-than-global scale, along geographic or community bounds. Strong collective pressure is imposed on "deviant" behaviours, be they individual, corporate or national. Democratic discussion is open, but decisions are strongly enforced. Scientific research and technological innovation is subject to strong ethical overseeing and funded according to its contribution to common goals, including the will to broaden the public domain of knowledge and share capabilities.

A combination of widespread innovation and bottom-up initiatives at local and global scales produces significant changes in energy consumption and production patterns: decentralized energy systems, substitution of products by services, innovative materials in everything from building to clothing to transportation, "cradle-to-cradle" product design, etc. Consumers strongly reward eco-friendly corporations and punish the others, helped by evaluation tools as well as private and public labelling mechanisms. Networks become the primary infrastructure, and the immaterial component of all economies becomes the main source of wealth, trade and growth. Markets and co-operative initiatives compete in achieving desirable goals for all. Global initiatives are mainly directed towards free trade and open markets; powerful, pervasive and mostly free communication networks; and education, whose role and process change deeply. Individuals and groups form the fabric of society, lowering levels of solidarity between groups or with disenfranchised individuals. Armed conflicts decrease while global crime becomes a major, almost recognized force. Diversity and autonomy are primary values at the expense of more common values. Technology developments are targeted towards human enhancement, peer-to-peer communications, empowerment. Crises and catastrophes are more difficult to fight but their occurrence does not destabilize the overall system.