Privacy in itself is a term often used, but never defined clearly. Psychologists, philosophers, scientists and linguists debate over the meaning. Aside from the ambiguity of the meaning of the word, there is much changing in the field of privacy. The question is: Where will privacy be, as an issue, in 2015? To answer this question extensive research has to be done first into different aspects of privacy: What is done against it, what is done to create privacy invasion, what rules are set, how do different people value privacy, etc. Upon answering these questions, scenarios will be created for the world of privacy in the future.

Driving forces categorized by PEST factors method.
Every driving force in the categories below are built up out of predetermined constituents: Description, Enablers, Inhibitors, Paradigms, Experts, Timing, and Web Resources

In order to start creating a system diagram, the initial, unmodified driving forces were mapped into a 'brainstorm' system diagram. 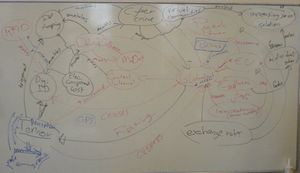 Version 1 of the brainstormed system diagram

This version seemed to revolve around two concepts; Globalization and Terror(ism). Feedback provided lead to the conclusion that:
A) Globalization should be split up into more defined driving forces
B) Globalization and terrorism are on their own very complex topics at this moment, so they require further in-depth research.
C) Politic, as found as a driving force, is a category. An actual driving force must be specified from this category.
Terrorism is something most people associative with the rhetoric as presented by the media, however, there is a difference between the reality and the rhetoric. Our task is to find our the difference so we can correctly find some distilled driving forces.
This version will be improved upon once the extra research has been completed and posted as version 2 below. 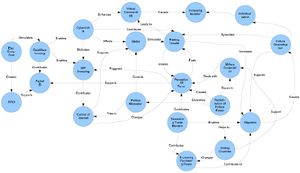 Version 2 of the brainstormed system diagram

This is the second version of out system diagram. The two centered spots we had in the first diagram are now worked out. We changed 'terror' in 'perception of terror' and 'Globalization' is worked out in several new parts. A lot of aspects still missing though.
Planning for version 3: 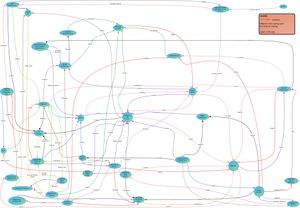 Version 3, and the semi-final systems diagram

This is the semi-final version of the systems diagram. Messy, but complete. However there is always room for more loops and additions, but through feedback loops and other control mechanisms we managed to keep it to a minimum.

look forward to seeing them, like how you are getting to the bottom of this issue!