The Future of Console Based Games 2010

Remember i like japan because its gay but anyway the dusty yellow days of Duck Hunt, where ducks where flying on your screen while you were shooting with your gun. It was not long before Nintendo days soon gave way to Sega nights and eight bits became sixteen. Mario met Yoshi, Sonic met Tails, and gamers met the new generation of the console wars. The bits kept doubling and doubling, and the gaming industry kept on growing.

6.What are the influences of the government and the media on the gaming console industry?

8. What new game experiences can be expected? (Virtual Reality) 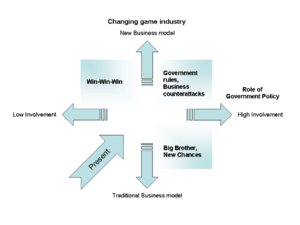